“Sometimes I don’t know whether I’m coming or going,” remarks Tom (Stephen Petcher) in this 1978 Play for Today adaptation of Alan Garner’s novel. It’s a comment that will resonate with the viewer struggling to get a grip on what they’re seeing, but it also points to the work’s larger themes. Because Red Shift is about a universe in perpetual motion. 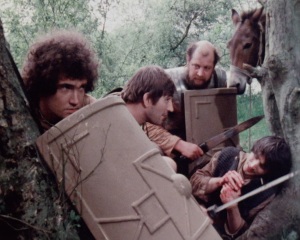 The film is set in the same part of Cheshire in three different time periods. The modern day story concerns teen sweethearts Tom and Jan (Lesley Dunlop), who are being split up by circumstances beyond their control. Way back in Roman Britain, some legionaries hounded by native tribes take refuge on the craggy summit of Mow Cop. Meanwhile, the third of the stories describes the massacre at St Bertoline’s Church in the village of Barthomley during the English Civil War. In addition to their geographical closeness, the stories are linked by main characters all inclined to visions and fits, and by a votive axe-head which the protagonists find and puzzle over.

Working from a script – full of wary, slanting dialogue and Northern drollery – by Garner, director John Mackenzie (best known for The Long Good Friday) sketches in time, place and complex characters in a tart, economical style that mimics the compressed knottiness of the author’s prose. But starkly dramatic though the historical strands are, it’s the modern tale that dominates. Remarkably, the characterisation of Tom and Jan has hardly dated at all – these are bright, well-educated kids, wise and knowing, but somehow still unable to avoid the usual pitfalls of first love.Tom is a gifted but unstable student, torn between his mother and his girlfriend, who is moving away to study nursing. Determined to impose some order on a relationship that is slipping from his grasp, he takes her on day trips to Mow Cop and Barthomley, scenes whose violent pasts we are aware of from the other plot threads.

The universe, as Garner sees it, is a volatile place, and human relationships are

similarly combustible, with a cosy Saturday lunch exploding in a frenzy of accusation and counter-accusation. “I bet you’ve flattened some grass in your time,” Jan snaps at Tom’s mother, one of the all-time unforgettable putdowns. Even if the film can’t quite match the grandeur of Garner’s book, it still captures something of the bracingly bleak quality of the author’s vision, local and cosmic at the same time.

visually, the film holds up well, and there are sensitive performances from Dunlop and Petcher, who has something of a Michael Sheen-like quality to him. Considering that this is a 36-year-old TV movie, you have to make remarkably few, if any, allowances, and it’s particularly striking for the editing by Oliver White, which features some daring cross-cutting where you jump centuries in the space of a reverse shot. The DVD transfer from a 16mm print looks clean and fresh, with sharp detail and nuanced skin tones.

The disc comes with an eccentric but revealing 40-minute documentary presented by Garner himself, and dating from 1972, when he was still writing Red Shift. He revisits childhood haunts and his old grammar school (with actor Robert Powell) and talks about his unique worldview and the autobiographical elements in the novel. The whole thing is slightly oddball in a typical ’70s way, but it’s also fascinating, largely because Garner has an extremely charismatic and confident screen presence – it’s clear that if he hadn’t been a great author, he could have had a career as a TV personality. In addition, there’s a 4-minute look at the making of the Red Shift TV play, and another piece of ’70s telly, a 19-minute tour of Cheshire in a vintage Rolls, with Michael Horden narrating.

Althogether this is an excellent package from the BFI. If anyone out there is still teaching Alan Garner, this is a must for them, and at the very least it should help to draw attention to one of the finest British novelists of the late ’60s and early ’70s